A US based defense contractor, an original equipment manufacturer (OEM) of Life Support Systems (LSS) for military applications had a need for a custom fan to be integrated in their product line. With TURBOdesign1, the company was able to bring the fan design process in-house and cut design time as well as production cost.

In developing the fan, engineers were challenged to develop a large air flow volume, low pressure fan characteristic with high air velocities over the stator blades. In order to achieve the best aerodynamic efficiency, it was necessary to avoid separation at the stator while recovering the static pressure. No existing standard design was known that could satisfy the requirements to efficiency, size and operating speed.

Reducing the fan noise was an additional design objective. Certain rotor design features were desirable to minimize fan noise. Forward sweep of the rotor blades, plus reduced chord length at the shroud, were to eliminate possibility of vortices shedding off from the suction side of the rotor blades and hitting the next blade pressure side close to the trailing edge. Another desirable feature was positive blade stacking at the rotor blade tip to minimize losses and noise associated with the tip clearance.

Originally the company evaluated several conventional fan design approaches, including all the available commercial codes based on a direct design approach. The evaluation criteria included computer system requirements and associated hardware costs, the number of engineers needed to be involved in the design process and the learning curve to produce new designs with a high level of confidence. ADT’s TURBOdesign1 software came out the winner in part because it did not require special hardware and, after just three weeks of initial training, engineers were able to tackle their first fan design case.

After completing and testing of two different axial fan designs, the company engineers became more confident that their next designs would be successful.

The inverse design code, used together with computational fluid dynamics (CFD) software, satisfied all of the new design objectives. The company was able to eliminate the costs of using outside consultants and reduce the lead time for new turbo-machinery designs.

“We found ourselves using all the features implemented in the TURBOdesign1 code,” said the company’s aerodynamics engineer. “In addition to specifying meridional geometry and blade loading, having the ability to specify custom blades thickness, stacking location and stacking profiles was very useful in achieving good aerodynamic designs.”

TURBOdesign1 output data was exported to a spreadsheet and additional design parameters, like diffusion factor for axial fans, were evaluated during the design procedure. This gave the designers an even higher level of confidence early in a design process, before taking it to CFD for evaluation and prototype construction and testing.

“We cannot put a dollar figure on our new ability to design our own fans, but, in our opinion, it’s invaluable.”

The use of the ADT’s TURBOdesign1 software made it possible to design an entirely new cooling fan from scratch starting only from design requirements. In the process, the company was able to eliminate the costs of using outside consultants and reduce the lead time for new turbomachinery designs of this type and produce their own designs in-house that are best suited to their application needs. 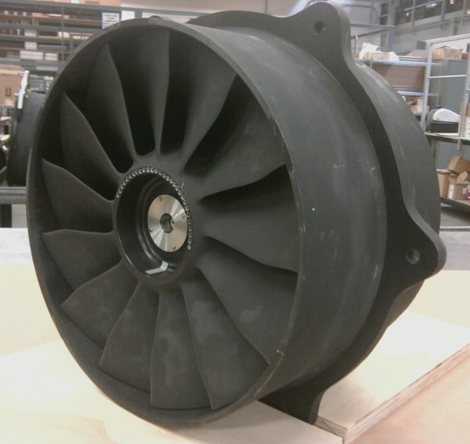 “We cannot put a dollar figure on our new ability to design our own fans,” commented design engineers. “But, in our opinion, it’s invaluable.”

Get the Latest Updates Direct to Your Inbox